Play as Gobs! Try not to get into too much trouble! But then do anyways! Additional themes include Building Communities, Discovering Yourself and your Purpose, and Adventure and Friendship! Use only exclamation points!

Build your Gob's Special between ten Traits and nine Powers, or use the guide to write your own!

Go on every day adventures as Gobs using the GOBVENTURES rules, letting both players and the Gob Wrangler to add spice into the story.

This is a Tabletop Roleplaying Game. All rules are self-contained.
You will need polyhedral dice, paper, things to write with, and some imagination!

In order to download this Tabletop RPG you must purchase it at or above the minimum price of $9.99 USD. You will get access to the following files:

Support this Tabletop RPG at or above a special price point to receive something exclusive.

Be a Gob and fight capitalism with your friends!
Feel free to grab one of these Community Copies! If you end up enjoying the game and have some money left around somewhere, please buy it for a friend!

Any purchase made above the asking price will go towards adding more of these Community Copies to the shelf!

Gobs Of Gobs is a bright, hectic, family-friendly rpg about goblins.

It's 70 pages, with an easy to read layout and a ton of charming, colorful art.

The core mechanics are fun and not tough to learn, and some of the cooler elements include a custom Attribute for each character (in addition to the normal Brains, Hearts, Mitts, Guts,) plus an open-ended skill system and dice bonuses when working towards keeping promises.

Dice rolls in Gobs involve a big old handful of math rocks, and you pick your two best from the pool you rolled. Skills, attributes, and gear all contribute dice, and drawbacks can both contribute bad dice and force you to take the lowest.

Rolls are usually against a TN, but the book also specifies straight-up choices as a way to resolve situations---and more importantly there's a resolution mechanic called Chaos. Chaos has everyone roll against a TN, and then the players have 15 seconds to trade dice to try and succeed. Under normal circumstances, it feels like the most common result is going to be everyone succeeding, but as soon a player gets a bad roll there's the potential for Chaos to turn into a logistic scramble to give everyone survivable dice pools.

Failures on the dice are rarely straight-up setbacks, and failures typically open up new routes of approach, damage equipment, add complications, and require the PCs to make promises. Goblins being fae, promises are binding.

Exploration has its own mechanics, with the party and the GM taking turns spending actions to investigate an area, and it almost feels a touch like combat from a different game. I like the other mechanical decisions GoG makes, but this one is probably my favorite.

That all said, lore-wise the book hits some weird beats. For example, each goblin society has a Mother who is responsible for reproducing. This feels...weird when it's first introduced, and only a good many pages later is it clarified that goblin reproduction is non-sexual and involves magicking them together from forest debris and broken tv sets or vomiting them up as spider eggs, etc.

To give another example, all goblins in this setting are bound by a wizard's magic never to kill humans. Humans aren't bound by any similar spell---even though the wizard seemed to have no trouble binding a whole species on the suspicion that some of them might be unethical. The intent behind this lore beat is to give Lines & Veils a physical, concrete role within the game world, which is cool, but I feel like this is a case where it's easier and more sound to simply say "play this game like you would an early 90s' cartoon."

Still, the book's writing is strong, and there's a lot of fun description peppered throughout. The goblins feel quite gobliny, and there's a *lot* of culture and lore.

There's a number of good GM tools as well, including a guide to creating a community's home territory, some solid advice, and a bunch of cool adventures plus a campaign hook.

Overall, if you like fun, light-hearted, low-to-medium complexity games with a lot of opportunities for shared storytelling, mayhem, and lessons at the end of the day, Gob Of Gobs absolutely delivers. If  anything I've described here sounds good, I strongly recommend picking up a copy.

-Page 46, "Gob society and identity were" this just cuts off. Is it a fragment from a prior draft, or did text get lost?

"made by them, and they know that. It is always in flux, and any change is adapted to."

Oops! Looks like there was something weird in the render and it got cut off. I'll have to get an update made. Also: thank you for the review! 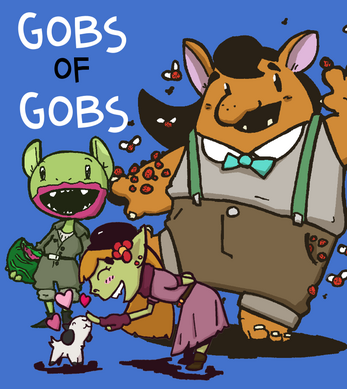 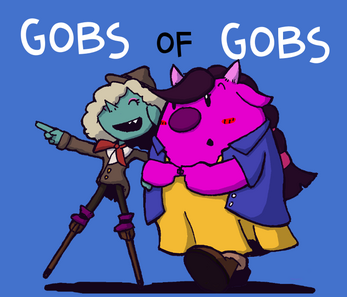 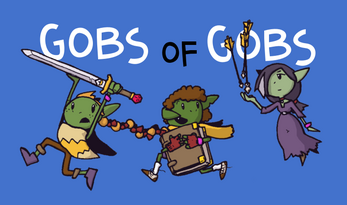 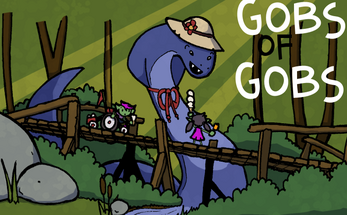